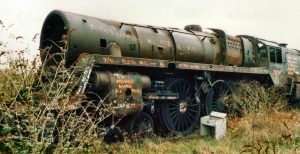 73156 was purchased by the Bolton Steam Locomotive Co. Ltd. on November 9th 1985 and transported to the workshops of the East Lancashire Railway at Bury the following year. Regular visits to Barry were made in order to prepare her for this event and upon arrival at Bury, work started immediately on stripping the loco. Much of the work comprised de-rusting, dismantling, cleaning and assessing the removed components for re-use or as patterns for new components not covered by available drawings. It is impossible to itemise every job done during the Bury years, especially the trials and tribulations along the way, but significant progress was made.

The locomotive was transferred from the ELR at Bury to the GCR at Loughborough in 2002 for the remainder of the restoration.

Whilst the locomotive restoration was being progressed at Loughborough by the GCR engineering staff supported by a small number of our East Midlands Support Group volunteers, the role for the North West’s Support Group volunteer workforce became very clear – to build a new BR1B tender from rail up! The complete structure was constructed in-house whenever possible, using contract work only when the required skills were unavailable to us, ultimately saving huge costs. The wheel-sets, chassis and tank are all new save a few items, such as the axle boxes, rear buffers, a few lamp irons and the water level indicator components. The structure was transported to the GCR for assembly in completed stages, firstly the wheel-sets followed by the chassis culminating with the tank which was craned onto the chassis in 2016. The final stages of the restoration including marrying the locomotive to the tender were completed in 2017, with the inaugural steaming event taking place on September 13th.